Jim is Thailand’s car, 4×4 pick up truck, 4×4 SUV, minibus, commercial truck and bus dealer and exporter. A family owned and family owned institution since 1911 can fulfill all your automotive needs from our branches in Thailand, Singapore, United Kingdom, Dubai, Australia, New Zealand and United States.

104 years ago our great grandfather built us on four principles of honesty, great price, great customer service and great quality and we continue to abide by these golden principles. This is perhaps why 80% of our business is repeat and referral business. Not only our customers keep buying from us generation after generation they also bring in new customers. We serve not only large corporations, governments, militaries, NGOs, car distributors, project companies, large dealerships and small dealerships but also individuals.

This Redesign has put Toyota Hilux 2020 Model on the top again as the new Revo is better than all its competitors as 2022 Ford Ranger Wildtrak, Mazda BT-50 Eclipse, 2022 Chevy Colorado, 2022 Isuzu Dmax, 2022 Nissan Navara NP300. The Hilux is as tough a pickup as a pickup can get and the new facelift continues that tradition, now just with that added touch of comfort and style.

The front is a completely new design. slim projector headlights and LED DRL (Daytime Running Lights). It seems be a cross between Toyota Highlander and Volkswagen Amarok. Some features will also remind one of Toyota Kluger. The side window line incorporates a kicked-back C-pillar and the A-pillars also appear to flow into the bonnet line more smoothly. There are more significant differences to surface design, including a new-look front end with redesigned headlights and a slightly different rear end with re-profiled bumpers. The Next Generation 2022 2023 Toyota Hilux Revo looks very curvaceous and is a completely new revamp of Hilux’s traditional look. The grill in front has two slimmer horizontal bars going all the way to the headlights, the rear curves inward much like Triton. The rear bumper is much nicer looking and the side step is more discreet. Bonnet has a more advanced lift. Both its cabin and bed are bigger in length and width making it an almost full-size pickup truck. Not only will it be more spacious in the front you can now carry more load in the back.

Toyota Safety Sense technology helps keep potentially dangerous situations at bay and you and your passengers secure: the Pre-Collision System uses a camera and laser sensors to scan for vehicles ahead and contribute to avoid or mitigate collisions; the Lane Departure Alert warns you if the car moves out of lane inadvertently; Automatic High Beam switches beam for safer night-time driving, and Road Sign Assist displays specific road signs on the new TFT display. Thanks to all these active safety systems, Toyota Safety Sense contributes to the reduction of collision risks which results in both a possible lower insurance premium and a safer driving experience.

Toyota Hilux Revo has a more car-like interior. Seats are VIP. A large touchscreen infotainment system as big as a tablet dominates the dash. A beafy three-spoke ergonomic multi-function steering wheel has all stereo and climate control features at its beck and call. Materials used in the interior of the pickup connote luxury.

So far Toyota Hilux Vigo was built on IMV and early development of Hilux Revo 2022 2023 Major Change Model has been on IMV-II platform. Now that Toyota has released its new Toyota New Global Architecture (TNGA) Platform, Hilux will also benefit from this standardization across Toyota’s product lines. All major manufacturers are now standardizing on a common platform, all future Volkswagen will be built on MQB platform and Nissan on V-platform. 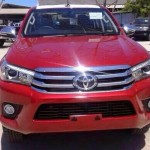 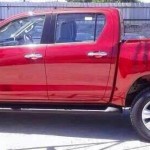